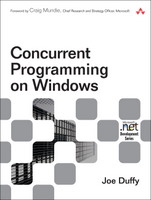 to his publisher. Since then I had been anxiously waiting for it to arrive. Well, yesterday was the big day. The mailman delivered a big package and to my surprise it was Joe’s book. I had it on pre-order for some time and hadn’t expected it to be such a big book. OK, I knew it was going to have around 1000 pages, but still…

Ofcourse I haven’t been able to read the whole book yet, but I’ve scanned through it and I must say that I’m really impressed by it. It really covers many, if not all, aspects of concurrent programming on Windows. Joe has divided his book into four parts. In the first part he explains what concurrency is at a high level, which is great to get you started. In the second part he then thoroughly discusses fundamental platforms features, inner workings and API details. Here you’ll read everything about threads, thread pools, synchronization, asynchronous programming models and the lesser-known subject of fibers.

Actually, one of the chapters that immediately caught my eye was the one in which he discusses why fibers aren’t supported in the .NET Framework. As it turns out Microsoft planned to add fiber support to the CLR 2.0 so SQL Server 2005 could continue running in its "lightweight pooling" mode (a.k.a. fiber mode) when the CLR was hosted in-process. However they decided to completely remove it due to difficult bugs and schedule pressure. Joe gives some nice background info on this and tells you why it isn’t a good idea to try to use fibers from managed code yourself (i.e. by using P/Invoke).

The third part of the book then covers common patterns, best practices, algorithms and data structures that emerge while writing concurrent software. Here you’ll read about concurrency hazards like deadlocks and race conditions, data and task parallelism and performance and scalability. The final part of the book then discusses overlapped I/O, I/O cancellation and GUI threading models. All in all a very complete and thorough treatment of the subject of concurrency.

As a bonus Joe added two interesting appendices. The first one focusses on designing reusable libraries for concurrent .NET programs and the second one discusses the Parallel Extensions to .NET. Although this last appendix is very interesting and extensive I’m still a bit disappointed by it. I had expected the development of Parallel Extensions to go a bit faster and had hoped they would be released by now, so Joe’s book would include full coverage of this subject. Because of the current state of the Parallel Extensions (currently only some CTP’s have been released, although some of it is scheduled to appear in .NET Framework 4.0) the appendix might (well… most probably will) be outdated very soon. Considering the popularity and importance of the .NET Framework and the multi-core future I expect these Parallel Extensions to become very popular. So coverage of them has to become an essential part of this book. So expect a second edition of Concurrent Programming on Windows to arrive in the near future 😉

is a definite must-have for anyone having an interest in concurrent programming on Windows and can be considered an instant classic. No other book out there has such an extensive coverage of the matter. Just get it!