Last week after Microsoft had released the Windows Phone 8.1 update there was a lot of buzz around Cortana, Windows Phone’s brandnew personal digital assistant. People found out Cortana had all kinds of funny responses to questions they asked her. But one of them was special. It turned out Cortana had an easter egg that triggered the return of the infamous Clippy. If you asked Cortana “Do you like Clippy?”, an animated Clippy would show up instead of the usual Cortana logo.

I wondered how this Clippy easter egg was triggered. So I fired up Fiddler and set it up so I could spy on my Windows Phone’s HTTP communication. It turned out that when you ask Cortana that question about Clippy, she will initiate a HTTP request to Bing’s servers. Bing responds with a bunch of HTML that seems to consist of two parts. One part is some plain HTML that Cortana uses to render the actual response in her window. So if you ask Cortana about the weather, Bing will return a piece of HTML that renders into a nice weather table. This is a very flexible solution, because Microsoft can add new Cortana response types by only changing some server-side code. Some day the following little Windows Weekly in-joke I crafted may even become reality 😉

@gcaughey @maryjofoley Cortana seems to be getting smarter every day 😉 #hadoop pic.twitter.com/UeR8pHXfIT

The second part of the response I found more interesting. It consisted of JavaScript and SSML, which are used to control Cortana’s vocal response. When I combed through the JavaScript, I noticed it contained the following DIV-tag:

The accompanying JavaScript seems to use the ‘data-emot’ attribute’s value to control Cortana’s emotion setting:

So there it was. I had found the piece of code that triggered the Clippy easter egg animation! I was quickly able to verify this, by using Fiddler’s AutoResponder feature. I set it up so arbitrary Cortana searches would get a response that contained the ‘clippy1‘ emotion. I posted a small video of this feat some days ago on YouTube:

One thing the above also showed, was that the Clippy animation had to reside on the Phone itself. I checked all HTTP traffic and it didn’t seem to contain the Clippy animation. I wondered if there were more easter eggs / emotion values I could use. Some further HTTP-sniffing showed that normal Cortana responses used the ‘CALM’ emotion. So I tried ‘SAD‘, ‘ANGRY‘, etc. Unfortunately those didn’t seem to have any effect. I also tried ‘clippy2‘, ‘clippy3‘, ‘bob1‘, ‘billgates1‘, etc. But they all didn’t seem to work.

Then I tried a different approach. I knew the new Windows Phone 8.1 Developer SDK emulator images included a working Cortana. And because Windows Phone 8.1 is just Windows 8.1 and the emulator images are basically Hyper-V images, it’s possible to mount their VHD’s and get access to their file system (you DID know that, right?). After searching the file system for a while I found Cortana’s image resources were stored in a couple of DLL’s located in the \Windows\System32 directory of the phone’s main partition; their filenames matching the pattern ‘PersonaAssets*.dll‘ (i.e. PersonaAssets720x1280.dll)

Looking at the resource list, I immediately noticed that ‘clippy1‘ didn’t seem to be the only easter egg. The file also contained a ‘CLIPPYRETIRED1‘ resource. I went back to Fiddler and changed the AutoResponder so that it would return ‘clippyretired1‘ instead of ‘clippy1‘. And when I performed a Cortana search I was greeted by an animation of a seemingly older and retired Clippy, wearing a pair of reading glasses! Brilliant 🙂

And that was when I first met all of Cortana’s current personas! Let me introduce them to the rest of the world:

I’m not sure if all of the resources extracted above can be used as an actual Cortana emotion (i.e. replace the default Cortana logo). I tried a couple of them and those all worked. It looks like the two Clippy animations are the only real Easter Eggs currently available. However, one of the resources is named ‘CIRCLE_SIRI1′, which must be a direct reference to Apple’s Siri.

Now that I’ve found these personas, I think it’s time to find the accompanying Cortana questions. What could you ask her that might trigger the retired Clippy animation. What question will trigger the Siri animation?

I think the fun has only just begun… 😉

Update: After I published this article, some members of the Cortana team have reached out to me! Marcus Ash, a Group Program Manager for Cortana, sent me the following tweet. Pretty cool!

@leonzandman Great stuff Leon. The engineering team was really impressed 🙂 We have some fun things planned for the animations.

Update 2: Looking for Cortana’s sounds? They’re WAVE resources, located in \\MainOS\Windows\System32\SpeechUXRes.dll on the phone. Use your favorite resource extractor to get them 🙂 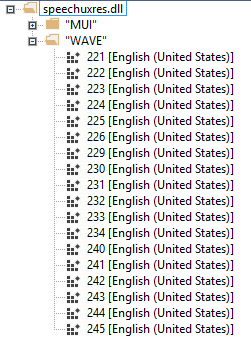